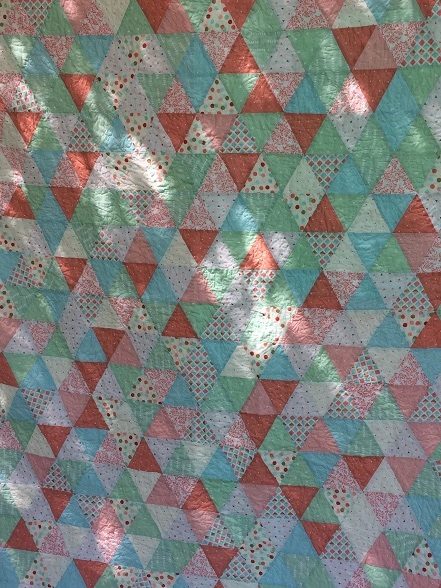 During the holiday season of 2015 I worked the fabric department of Hobby Lobby. I loved it. I was in my element. I didn’t realize how much I enjoyed teaching sewing.  Or how much I had missed working with massive amounts of fabric & notions.

After the seasonal rush, I had time to play around in the fabric and dream. And design. And buy.  I was in love with the coral and aqua line they carried from Brother Sister Design Studio, a division of Hobby Lobby.

The fabric sat around until January 2017 because I wasn’t sure what I wanted to do with it. Enter the Accuquilt cutter. I had purchased one the previous Thanksgiving during the

Black Friday sales and was looking for a reason to use it.  A friend had the triangle die, so I borrowed it and spent an afternoon cutting out a small mountain of triangles.

At my annual beach retreat I spent some time chain piecing.  It was mindless work that allowed me a break from reality.  However, 2017 was a very busy year for me and I did little quilting (as my blog shows).

In January of this year (2018) I was ready to sew. It was time for beach retreat again and I packed up my triangles, along with a few other projects, and this time managed to finish sewing all of my rows together. I completely forgot to bring my border fabrics, though! Argh!

My sewing had sat idle for too long. Once I got home, I was a whirling dervish and completed three, yes THREE, tops the week following retreat. I couldn’t believe it. To entertain you, here are Captain Marmalade and Pink Paws inspecting my work. As you can see, Pink Paws is singularly unimpressed. Slept through the whole thing.

Such pretty points! This quilt really stretched my  piecing capabilites. You can see some pretty points in the quilted picture, too.

Time quickly flew and it became the end of February. One of the women in my Texas Quilter’s Group contacted me wanting to get rid of the vintage Gamill mid-arm quilting machine she had been given. She wanted to post it in the group, but didn’t want people fighting over it. Hahahahaha,  like that was ever going to happen. The 12-foot frame is now residing in my living room.

I spent a couple of weeks practicing my stitches and playing with different threads before I put an actual quilt top on the poles.  By the time I loaded my Accuquilt project on the frame, I was confident I would end up with a pretty, finished project. It only took me two days to quilt this sweet quilt and I’m in love with it.

Spring in Texas comes with some magnificent blue skies and on the day I photographed this quilt, the sunlight was filtering through the trees creating this dapple effect. Since I hadn’t come up with another more creative name, I called this quilt Dappled Triangles.

As a side note, this quilt was my first time to use a pieced back. I had purchased far more yardage than I needed and I think it worked out nicely.

Do you have an Accuquilt cutter and some geometric dies? Have you used them? Don’t be trepidatious! Use them, learn from them, create something special.

Linking up with Cooking Up Quilts.