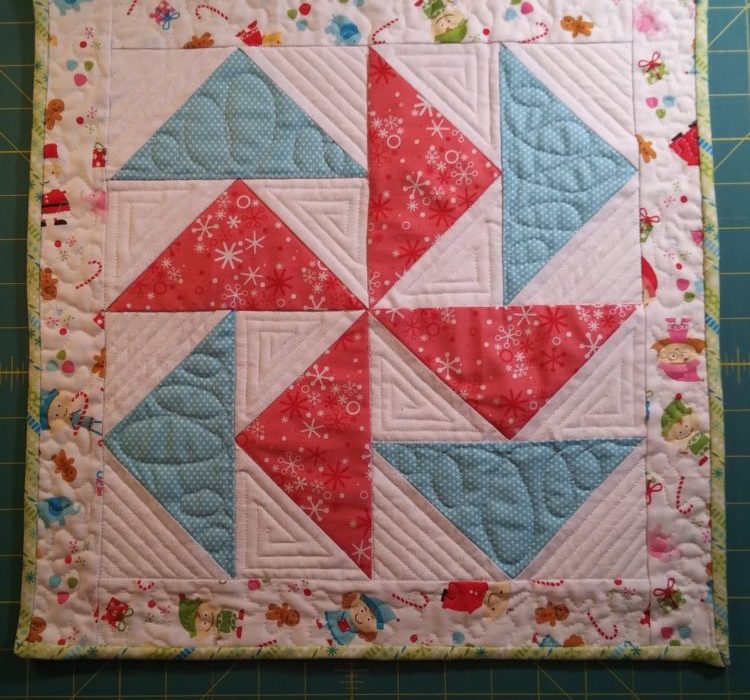 A Christmas mini quilt made from flying geese

Happy New Year! It’s 2019 and I have one final finish of 2018 for you.  This little mini quilt was a fast, last-minute project that worked up in just under four hours.

A good quilty friend of mine gifted me four fat-quarters from the Santa’s Workshop line from Riley Blake. They are just sweet.

To begin, I cut one 7 1/2″ square from two different FQ’s and four 4″ squares from my background fabric. Then using the no-waste flying geese method, I made four geese from each larger square. Each set of four takes 8-10 minutes to make.

Using my flying geese Bloc-Loc, I trimmed the geese up square and played with the layout.

I liked the look of the dark pink as the pinwheel more than the reverse, so that is the layout I chose.  I then stitched one dotted blue goose, and one pink snowflake goose together which, when each set was sewn together, created four pair of geese.

The next step was to sew two sets of geese to each other. Lay one set face up and rotating a second set one turn to the right, lay it face down on top of the first set. Using your scant 1/4″ seam, stitch them down the right side of the block. Press to set the seam, open and press the seam flat. Repeat with the second pair.

Once you have reduced your geese to two long pieces, lay one face up with the points of the geese on the left pointing away from you. Take the second strip and lay it in the reverse direction face down on the first strip. Line up up the seams and stitch.

After sandwiching the mini quilt, I pinned it with curved pins versus basting. In the blue geese I used a water soluble marker and drew continuous loops.  Then using my very timid FMQ skills proceeded to follow those lines with an open-toed foot. Not perfect, but progressing.

In the background triangles I used a combination of straight line quilting and echo quilting. It went so quickly!

Then in borders I used a basic stipple to try and increase that skill. It’s getting better as I don’t have any eyelashing on the back.

Once my geese were quilted, I took the fourth fat quarter which had a striped pattern and cut 2″ strips on the bias and joined them using a basic straight stitch. I then bound the mini-quilt using traditional binding methods.

I’m so happy with how it turned out!

Because the fabrics were gifted to me, I am keeping this little quilt and am considering hanging it on the wall of my sewing room. I just have to figure out how to accomplish that. 3M velcro strips maybe???

My New Year’s wish for you is that you find plenty of time to sew and quilt, that your stash remains plentiful and that your bobbin never runs out.

Peace and blessings for the new year!