Because Quilting Is Better With Bare Feet
Applique Quilting 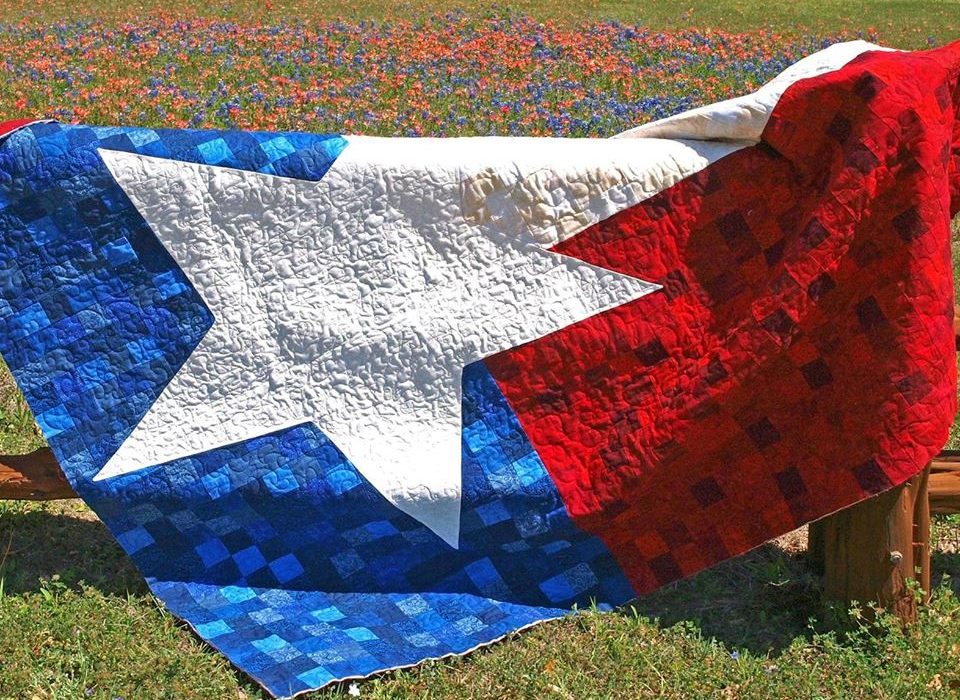 A Texas 9 Patch flag quilt is super easy and super quick to make. Making this 9 patch flag quilt can be done in a long weekend or during quilt retreat.

In the spring of 2014, my daughter’s school needed a fundraiser. I volunteered *insert shudder* to create a quilt for a raffle. I’d had this bundle of fabrics just sitting here collecting dust and who would appreciate the design more than a bunch of Texans?

It was spring break and Junior was going to spend the week with her cousin so I had the house to myself. For three days I cut, I sewed, I ironed, then I sewed some more.  For 14-16 hours a day I pushed to get that quilt made.  My efforts were rewarded. The final result was stunning. And I’m more than a little disappointed that I donated that quilt. However, ironically, a relative won that raffle and it now hangs on her living room wall.

The pattern is Texas 9-Patch designed by Bobbie Cordes, and is available from Quilt Country.  As I mentioned, the fabrics were purchased in a bundle and chosen by the quilt shop where I purchased them. The blues are incredibly vibrant and are a variety of royals that I haven’t seen in quite some time.

Unlike most projects, I did pre-wash my fabrics, and washed the reds twice. I didn’t want to risk the reds ruining the creams and my finished project. It was worth the extra sewing & ironing. After I washed the quilt, prior to the raffle, there was no dye bleed off.  Whew!

By this time my wrist needed a break, so I set my machine up in the dining room and proceeded to wind a dozen bobbins, change the needle, and made sure the lint was cleared out. My machine was ready for a marathon.

Starting with the cream strips, I stitched them together in strip sets of three.  Randomly choosing the strips, I continued until the entire pile  was exhausted, like me. Hahaha, seriously though, at this point, I just needed a coffee boost.

Once the strip sets were sewn, I pressed the seams facing the same direction. That way once you start piecing the 9-patches, you will just need to rotate the sets until the seams nest.

After you have sewn and pressed your strip sets, take them back over to your cutting mat and cut them into 2 1/2″ by 6 1/2″ strips.

Random is key with this quilt.  Take  your cut strip sets and chain sew them into 6-patches, then into 9-patches until you have the required amount. Press them flat.

Repeat the previous steps with your red and blue strips.

If you have a design wall, (a bed or floor will work, too) start laying out your cream 9-patches. When you’re happy with the layout, stitch the blocks together to form rows, then sew the rows together.

Repeat the process with the red & blue blocks. Following the pattern, assemble your quilt top.

The pattern offers two options for the star on this flag quilt, large and small. As you can see, I chose the oversize version.  Using Bobbi’s directions, I have to say I love how easy it was to applique the star on. Iron on interfacing is so handy.  In addition, I chose to hand stitch the star down instead of machine applique. In the future, I would machine applique for the time efficiency.

I am slowly learning to free motion quilt, so I sent this top off to the long-armer, Gerline’s Quilt Shoppe in Giddings, Texas. She did an amazing job. Gerline used a silver thread and quilted a meandering star inside the star and did thread changes for the colored sections of the top.  A blender red backing was used and an 80/20 batting was the middle of the sandwich.

For the binding, I boggled more than a few minds when I used some leftover strips to match the colors for a seamless flow. It’s not that difficult, you just need to pay attention.

I want to give a shout out to my friend’s, the Kruzie’s, for letting me use their business, Texas Old Town, to take pictures of the finished Texas flag quilt.

The photo above was actually taken the day I picked up the quilt from the long-armer and before I attached the binding. It was taken at Lockhart State Park. As you can see, the bluebonnets were at their height. I was having issues with my camera and there just happened to be a professional photographer hired by Texas Parks & Wildlife driving by and he took pity on me. My apologies to that wonderful man, I cannot for the life of me find his email or his name. I would love to give credit where credit is due.

If you happen to purchase this pattern and create your own version, I would love to see it. Let me know in the comments if you get a copy of this pattern. You won’t be disappointed in how quick and easy this Texas flag quilt goes together.

Linking up with Main Crush Monday.