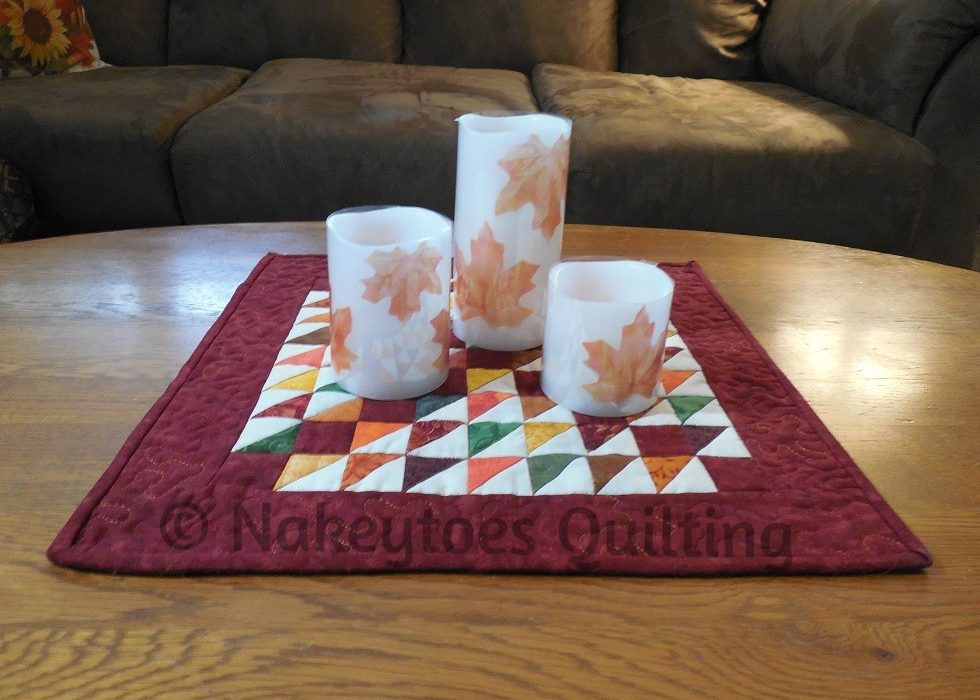 I’m one of those quilters who can’t stand to throw out the smallest of scraps. When I was making my Autumn Stars quilt, I had tiny half square triangles left over from snow-balled corners. I tucked them into a Ziplock and set them aside figuring it would be quite some time before I found a project in which to use them.

A week later I was trolling Instagram and saw where everyone doing the Moda Blockheads 2  was making a block called Mountain Climbing.  Aha! That was where I could use my tiny hst’s!

I laid them out and searched for a setting fabric. I had a bit of rust colored Moda with a leaf pattern that matched some of the hst’s. Perfect!

The pattern is simple, especially once the half square triangles are made. Lay them out and place the square pieces  in the empty spots and begin to stitch the rows one by one.

I then practiced some free motion quilting with a basic stipple. It’s getting better and better. No eyelashing now. 🙂 The thread I used on top was a variegated 40 wt from Superior Threads in shades of terra cotta, color #911. It’s a beautifully rich thread with autumn tones. The bottom thread is a 40 wt from Aurifil in a gold color.

This little autumn candle mat is finished in binding of the same Moda used for the borders. I started with a 2″ strip folded in half and I used traditional binding methods.

Linking up with Confessions of a Quilt Addict,    Off the Wall Friday with Anna Marie Sayer, and My Quilt Infatuation.